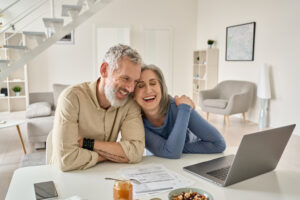 If recently the term “Boomer” has taken on a negative connotation in certain contexts… well, what hasn’t?  But Baby Boomers, that generation born between approximately 1946 and 1964, have a tremendous amount of buying power.  And right now, they are the ones that are phasing into a period that might put custom home building foremost on their minds.  They’re a savvy lot, this demographic, and while you can never generalize preferences ubiquitously over an entire segment of the population, this generation does display some predilections that are worth paying attention to.

Keeping it clean and green are big Boomer priorities.  As such, lawns and patios are must-have accoutrements for this clientele, and eco-friendly landscaping, sunny, well-lit atriums and porches all feature highly.   Features like rain capture for garden irrigation, sustainable materials and solar panels are all hot commodities.  The desire for outdoor space and yards was compounded by the pandemic as well, but this is trend that probably won’t fade away, as the appreciation of a little extra elbow room, and even the economy of home-grown herbs and produce, are becoming more valuable in general.

Speaking of clean, Baby Boomers require a formidable laundry situation, so don’t think a little closet with a washer and dryer will do.  Folding areas and an airy space for line-drying are coveted, as well as mud-room features like a deep sink for hand-washing.  But they probably don’t want it in the basement: there’s a trend towards single-level construction, which both minimizes the need for hauls up stairways and all the stress it puts on those knee and hips joints, and reduces size overall.  They also brandish quite a bit of foresight, knowing that eventually one level is going to be prudent in their senior years.  While Boomers typically like an airy feel to their new abodes, that doesn’t necessarily translate into grandiose square footage.  More bang for the buck, so to speak, making use of less space with greater efficiency and utility.  Having lived through the Great Depression, they exhibit a high level of resourcefulness.

Most Boomers, especially those on the younger side of the approximately 55 to 73 years age bracket, are still active and productive.  60 is the new 40, yes? Thus, many want an office space within their home, even as pandemic working-from-home relaxes ever so slightly, and some are returning to the office or on-site workplace.  A quiet, serene den area or office space can serve multiple purposes, too, convertible into a guest space or workshop if and when retirement does eventually occur.

That’s not to say these people are workaholics.  Entertainment space and modest tech luxuries like those enormous flat screen t.v.s that have become relatively accessible in price are also popular among this demographic.  Also, an open floor plan that works for entertaining, and removes associations with their stodgier predecessors multi-roomed and cordoned off design formats.

So what do Boomers want?  Frankly, it’s not that much different than any other demographic, when we’re speaking in generalizations.  With the access to information and ability to see into how-the-other-half-lives, there has been a moderating tendencies among generations.  They are old enough to remember and appreciate the stability of tradition and simplicity, but they ARE Baby Boomers… most raised children (or if they had Millennials, will always continue to do so), so they know what the younger generations are up to and are open to innovation.

Please Share This
Read Previous Article:
« The Importance of a Good Floor Plan
Read Next Article:
Luxury Features for your Primary Bedroom »

Do you have a question or want to schedule a personal tour?
Fill out the form below and someone from our friendly staff will be in contact shortly.